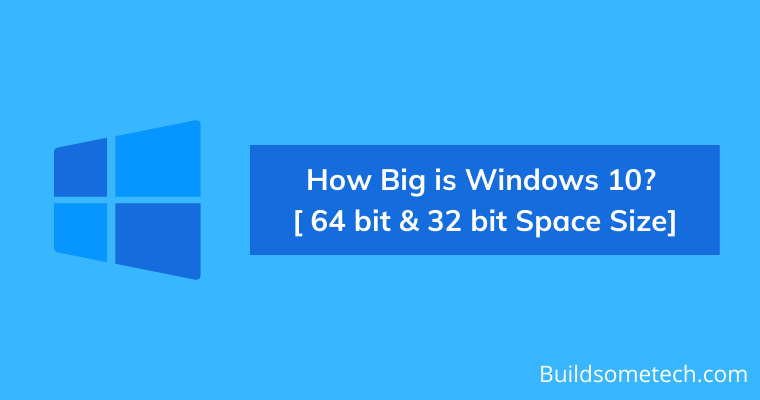 Want to know about how big is windows 10?

Although, Windows 10 is one of the best operating systems from Microsoft. (Which is running on 1.3 billion devices)

But it still annoys its users because of its big file size.

And that’s why Microsoft is trying very hard to decrease the file size of Windows images.

But this never worked out & It keeps on increasing with new updates.

Also, I have seen many users searching for “how much GB space is required for Windows 10 64-bit”?

And I think this is only because of 2 reasons, one they want to know about “how much data would be required to download Windows 10” and the second one is “how much space it will take on your hard drive“?

And both the reasons have a different scenario, which we will be discussing in more detail in this post.

So let’s get started.

But for many users this is a very big size to manage.

And that’s why the company is still trying to decrease its file size so that the users can easily download it or can have it on their hard drive without taking up so much space.

And after many trials & efforts, they were unable to compress it to a smaller space size of 16Gb. And the discussion on this is still on.

Although, they were unable to decrease the file size of installed windows 10 on a hard drive but I must say they have really done a great job in compressing the file size of ISO Image to 4.5 Gb.

And eventually, this has helped a lot of users in downloading at faster and also with less consumption of their internet data.

But the other issue of hard disk space consumption is still on and it is getting worse with new updates & features of Windows 10.

So let’s see how much actual space it is taking…

Although, I have already talked about this in the previous section but here I will explain it in more detail. Considering about the space size on SSD is similar to the space size on a hard drive and it is that size that is consumed or take up on a hard disk after the new installation of windows 10 is done.

But according to Microsoft, the space size is like this…

How Big is Windows 10 on USB Flash Drive?

Although, I have already talked about this in the starting section but here I would give you some more details about this. Basically, the file size of windows 10 on USB is that size consumed on USB Drive when a new windows 10 bootable USB is created.

Also, it is somewhat similar to the file size of the ISO file because this bootable USB is also created with the help of an ISO file. It is somewhat around 2.5 Gb to 4.9 Gb.

And according to Microsoft, the space size is like this…

However, this section is almost similar to the above section of USB Flash Drive because the ISO File is also downloaded from the Microsoft and then it is convert to a bootable USB Drive.

And that’s why the Windows 10 download file is similar to the ISO Image file size. But this may also differ with the different versions of Windows like Home Premium, Professional, Home Basic, and also in 64bit or 32bit versions.

And the ISO file size also depends on which version of Windows you are downloading like if you are only downloading the Windows 10 Pro 64 bit or 32bit then it would be somewhat different in comparison to the Home Basic and the ISO file which contains all the Versions.

And according to Microsoft, the basic download size of ISO file of any version is like this…

How Much Space does Windows 10 take up?

From past few years, Windows 10 is giving their updates on a monthly basis for all users whether they are a Home user or a Business user.

Although, these updates really help in security and getting new features but they also increases the space taken by Windows 10 on a hard drive.

And this really makes users annoyed who has really less space available on their SSD or Hard Drive.

And that’s why more users are searching for “how much space does windows 10 take up in 2021”, so that they can know the actual size of it and can remove unecessary files from it.

And the worst part is that these updates also increase the size of backup files. So if you are also in the same situation then check out this post on how to delete backup files in windows 10. ( Helps in saving space 🙂 )

At last, the space taken by Windows 10 is around 25 Gb for 64-bit and 16 Gb for 32-bit. And this is the same space you find on your local disk C: when you install a new windows on your machine.

Now let’s move to the next part & check out what are the minimum system requirements for Windows 10.

How many GB does Windows 10 take up?

Once installation is done, Windows 10 takes around 20 GB for 64-bit and 16 GB for a 32-bit version of storage space on your hard drive.

According to Microsoft, 25 GB of free space is recommended for installing Windows 10 64-bit version on a Laptop, PC, or Computer.

Yes, 128GB of HDD or SSD space is enough for running Windows 10 on any device. But after getting a few newer updates, it will be fully occupied.

Yes, 50GB of SSD or HHD space is enough for Windows 10 installation purposes but if you want to use it professionally with lots of apps then it’s very low.

So, that’s all about the windows 10 OS and how it takes up spaces on different mediums in different forms. Basically, this post is on the basis of laptop & computer versions but this may also differ on the other devices which uses windows like tablets, Notebooks & many more.

Feel free to share your thoughts via comments and also tell us if you liked this information on How big is Windows 10? [64 bit and 32 bit]