Want to know about this query, then you are in the right place.

Well technically speaking! No, as per Microsoft you need at least an 8th generation Intel core CPU or newer ones.

Apart from that, TPM 2.0 and secure boot are the two major requirements that are necessary for this operating system.

But some users have also reported that they didn’t face any issues while running Windows 11 on an Intel i7 4790k processor.

And at the same time, most of the users have reported that they are facing compatibility issues with 4th generation CPUs, like this one also.

So, to clear all your confusion, let’s dive in further…

In this post, we’ll take a look at whether this processor is compatible or not. Talking about this Intel(R) Core(TM) i7-4790K CPU @ 4.00ghz which was released on May 2014 date is very optimal performing chip but due to non-compatible TPM it cannot run on this latest Windows 11. 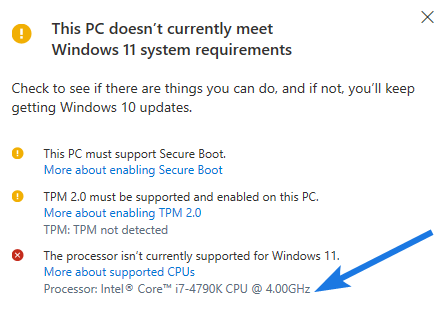 Does Intel i7 Support Windows 11?

No, the intel i7 is not supported by Windows 11 and this also includes the unlocked K series processors, which are designed for overclocking. Moreover, Microsoft also doesn’t recommend installing this latest operating system on their desktops which are having CPUs lower than the 8th generation.

According to the company, if you try to install this OS on unsupported Intel CPUs then it may result in compatibility issues, decrease performance, and even damage to your PC which might not cover your warranty. Also, you won’t be getting new features and security updates due to this.

No, the core i7 4th generation cannot run Windows 11 which also includes the 4790k processor. But some users have also mentioned that they were able to bypass the hardware compatibility test using some hacks or we can say the registry files of the operating system. And you can also do that, but there is no guarantee that your device will work normally.

Apart from only having 4th gen CPU, there are some other hardware requirements that are important such as UEFI firmware, secure boot, TPM 2.0, DirectX 12 with WDDM 2.0 driver, and many more. So, instead of only relying on the processor also check for these features.

Yes, the Intel Core i7-4790k has an old version of TPM but not the TPM 2.0 which is a mandatory requirement for Windows 11. And If you don’t know about this Trusted Platform Module chip, then you can read the resource that we have linked above. Because it is very necessary and without that, you won’t be able to pass the PC health check app test.

And if you want to get a quick overview then TPM is that security feature that helps in data encryption, authentication, and protection of sensitive information stored on your computer system.

Can an i7 processor Run Windows 11?

Yes, an i7 processor can perfectly run Windows 11 but it is not recommended by Microsoft due to security reasons. Although, the Intel i7 CPUs are very powerful but the only thing why they are lacking behind is because of the outdated version of the TPM chip. And that’s why the 4790k CPU which belongs to the 4th generation processor is facing issues while installing this new operating system.

In that case, I would suggest you to run a compatibility test and check if your device is only failing because of the processor or UEFI firmware. Because if this is not the reason then we can also install Windows 11 without TPM on any unsupported CPU using this resource.

So, that’s all about the Intel i7 4790K processor and if Win11 operating system can easily ran on systems having this CPU. Also, many users on reddit have shared that they are running this OS and also getting new updates on regular basis.

However, it is not officially compatible but yes you can still use it on old generation cores but only after risking your security & privacy.

Feel free to share your thoughts via comments and also tell us about this post on Can Intel Core i7-4790K Run Windows 11?