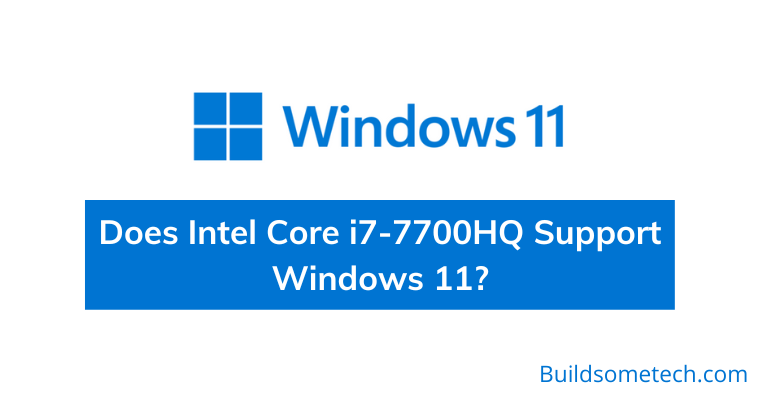 Want to know about this question, then this post is for you.

It has been almost a year since Microsoft officially released its latest operating system.

But still, there are lots of queries related to Windows 11 which are not answered clearly by anyone.

And if we look at them, then most of them are related to the processors and the compatibility issues which are caused by the new hardware requirements.

Similarly, many users who are using an Intel i7 7700HQ CPU on their system have reported that they are unable to install this Windows OS on their Laptop, Computer, or PC.

But if I look at the discussion forums, some users have mentioned that they are running Windows 11 without any issues.

Although, this 7th generation processor is very high performing and can do all tasks easily for any basic user. But due to the outdated version of this Intel(R) Core(TM) i7-7700HQ CPU @ 2.80GHz processor is not supported by Windows 11. And if we look at the release date of this chip, then it’s 2017 which is almost 5 years old as compared to the present 2022 year.

Adding to it, this CPU belongs to the Intel Kaby Lake series which was pretty decent but when we checked the compatibility using the PC health Check app, then it’s shows that it is not compatible. 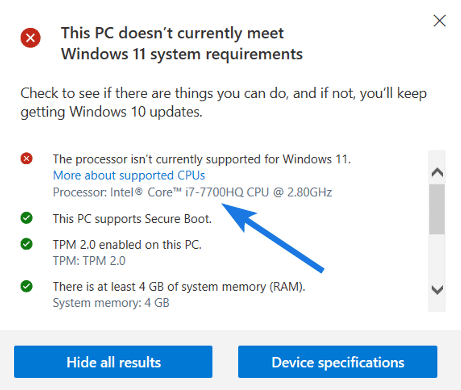 Now let’s get some more answers…

No, the i7 7700K processor does not support Windows 11 but in one of our recent posts, we have already shown some awesome to run this operating system without any issues. Doesn’t matter if your system has the updated TPM 2.0 ( Trusted Platform Module ) or not with the right Secure Boot or UEFI mode.

Like the i7-7700, this CPU was also released in the 2017 year but this was basically developed for desktops whereas the HQ model was released as the notebook processor. And that’s why this chip was more efficient with a high clock speed 4.20GHz which is more than enough for running any Windows operating system.

In the early days when Windows 11 was released, many of the processors like Intel Core i7-7700HQ were listed on the list published by Microsoft. But when the user tried installing it, they got a message that this PC doesn’t meet the minimum system requirements for running this OS.

All these requirements are mandatory because it helps in getting a reliable and higher quality performance. Also, if someone tries running it then may face compatibility issues and will not be covered under the warranty. Last time, the list was updated in 2022 but there was no mention of this processor, so we can say that this will not come again.

Can Windows 11 run on i7 processor?

Yes, Windows 11 can run on the i7 processor but it must belong to the 8th generation of CPUs. This means that the Intel 7th gen 7700hq cannot run this operating system. And this not only applies to this specific model but there are many more chips like i7-7500U, and i7-7820HQ which are not supported by this latest OS.

All of us know that the Intel i7 processor is very powerful and that’s why it sells very fast as compared to other ones. But when the company tested the 7th generation of the processors they found that they were not performing well with this Windows 11 and that’s they stated that only the 8th gen will be supported or the later ones.

Yes, Windows 11 can be easily installed on Intel i7-7700HQ but according to Microsoft, you will not be receiving any official updates and you may face a decrease in performance. Apart from that, I have seen many users have received the 22H2 version update on their PC but when the compatibility check is done, it still shows that it is not compatible.

Although, all the hardware requirement like TPM, UEFI, VBS, Windows Memory Integrity, and Secure Boot was made important to increase the security and privacy of the systems. And due to this many high-performing machines such as Dell XPS 15 9560 were wasted and now they are completely useless. But if you just want to try then you can still install it on an unsupported PC right now.

So, that’s all about the i7-7700hq processor and Win11 operating system. In this post, we have tried to answer all the important questions that are highly related to this topic. Also, we have gone through different Microsoft forums and Reddit forums to gather this knowledge for you.

Moreover, if you are still stuck with an unsupported CPU, then you can keep using Windows 10 which will be available till 2025.

Feel free to share your thoughts via comments and also tell us about this post on Does Intel Core i7-7700HQ Support Windows 11?