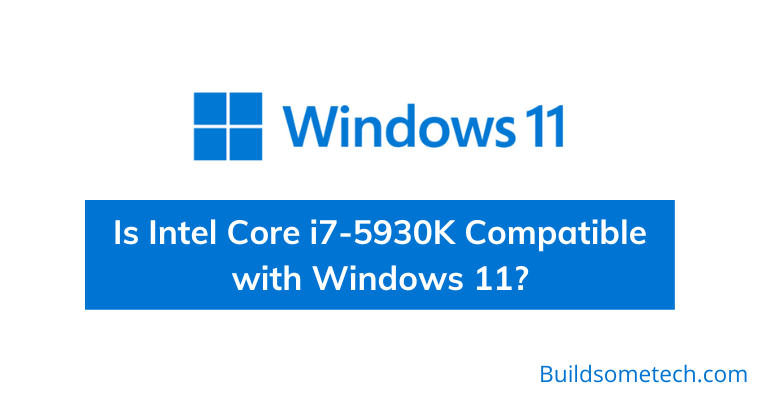 If you want to know about this query, this post is for you.

Microsoft has repeatedly shifted its stance on the minimum system requirements for Windows 11.

At first, they said that users had to meet all of them for a smooth installation and performance, but now the company hints that users might be able to bypass some of them, at least in later updates.

And with that, they recently added a few 7th gen CPUs like i7-7820HQ and some Xeon chips to the list of supported Intel processors and also the compatible chipsets.

Despite this uncertainty, it is still not clear to many users whether their Intel i7-5930K processor meets the minimum required specs in order to take full advantage of updates and features.

And to clear all your doubts. we have created this detailed article.

There are plenty of processors that may be incompatible with the latest Windows 11 operating system, due to their lack of necessary features such as Secure Boot, UEFI, and TPM chip. However, Microsoft is making efforts to support the old-generation processors, while the Intel(R) Core(TM) i7-5930K CPU @ 3.50GHz may be left out. However, there is a possibility that it will be supported in the future, but at the moment it has not been listed as one of the tested processors.

And to see if your computer meets the minimum requirements to run Windows 11, you can use the official compatibility checker known as the PC Health Check app. The app automatically scans the hardware on your device for compatibility issues and gives you the results of whether it is supported or not. 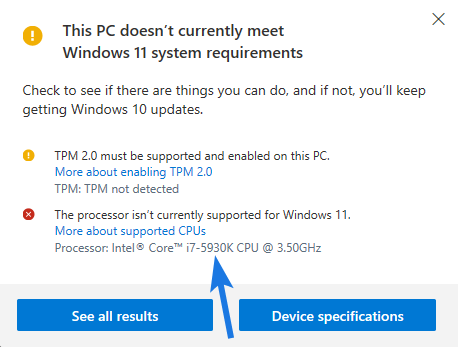 Yes, the Intel i7 can easily run Win 11 but the processors must belong to the 8th generation or higher and also follows other guidelines which are required for running it properly. However, the processors below the 8th generation may not be fully compatible due to issues with DCH compliance of their driver packages which is an essential requirement for Windows 11 installation.

Moreover, this is not the only processor but there are many popular chips like i7-5820k and i7-5600u. And in that case, you can do a few workarounds suggested by Microsoft for smooth installation but you might have to do some extra work before running it properly on your computer.

No according to Microsoft’s processor list, the Intel Core i7-5930K is not supported by Windows 11. Furthermore, this CPU is from the fifth generation of Intel’s “Haswell-E” line of processors, which was released in 2014. And being an older processor, it’s not designed to run Windows 11. And because of this, some users with ASUS X99-A machines have complained that they have TPM 2.0 and Secure Boot but still not working. Although it’s better to upgrade using the official update methods, some people prefer the unofficial way because of various reasons.

No, the Intel i7 7th generation is not supported for Windows 11 and that’s why you can’t update your PC through the official updates. As of this writing, Microsoft has only tested and validated CPUs from one or two years prior to the release, this is what you are seeing on their official supported list.

Moreover, the company is apparently looking into CPUs from the Zen 1 and Kaby Lake lines. However, if you are still downloading Windows 11 on 7th gen by other means you have to make sure that you use a new driver model called Windows Drivers, which Microsoft claims can reduce driver-related crashes by 99.8%.

Can we Install Windows 11 on i7 5th generation?

Yes, you can easily install Win 11 on Intel i7 5th gen processors. But it is not officially supported by Microsoft and you can still get it on any unsupported PC by using this unique way. Some user says that there are risks involved in this process but according it’s totally fine. As all these older processors lack a crucial feature called a TPM 2.0 chip, which makes it difficult for Microsoft to support them. However, if you are willing to take a risk with an unsupported operating system, you can still use it.

So, that’s all about the i7-5930K processor and whether it will be compatible with Win 11 or not. However, your experience might be subpar if you do so, Microsoft recommends that you use newer hardware for official support from both the vendor and them.

Also, it is recommended to get a laptop with an 8th generation CPU or better for installing this OS.

Feel free to share your thoughts via comments and also tell us about this post on Is Intel Core i7-5930K Compatible with Windows 11?