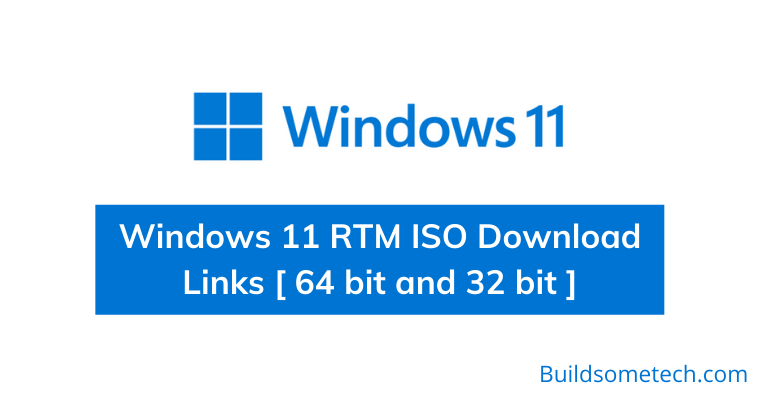 And now on 5th October 2021, they are planning to release the first Official RTM OEM build version all over the world.

And this would be the first stable release of this operating system.

But before downloading the ISO image file, I would suggest you to first test your PC using Windows 11 upgrade checker tools.

Moreover, if you have recently purchased a new Windows laptop then there is no need to test it and you can directly download the RTM ISO file.

Because all the new systems are already fulfilling the basic system requirements that are required.

What is RTM version of Windows?

RTM basically stands for Release to Manufacturing version of Windows. It is the first version of any software or operating system released for the general public. But before that, this RTM version goes under lots of testing processes where all the major bugs are fixed. Also, the RTM version is not specially related to Windows 11 but it is related to all the software applications out there.

Moreover, there is one OEM ( Original Equipment Manufacturer ) version also which is almost similar to the RTM version. And if we talk about the differences, then the OEM version can only be used on one locked hardware whereas the RTM retail version can be used on any PC.

Apart from this, both the version has similar features, functions, & updates whether you are using any version like Home, Professional or Windows Server 2022.

Although, most of the users have already experienced this new Windows OS on their PC but there are so many users who are still waiting for the RTM build to install Windows 11 on their systems. But now, the wait is over as Microsoft will be providing the RTM ISO Image file of their latest version of Windows OS.

Similar to the previous version of Windows 10, this time also Windows 11 is going to be released in different versions and architectures. Some popular versions are Home Basic & Premium, Professional ( Pro ), Enterprise, Windows Server, and many more. But I have heard many rumors like there will be no 32 bit version and Windows 11 64 bit will be only available as architecture options.

Till now, there is no confirmation related to this but will soon be revealed after the RTM ISO is released by Microsoft.

Apart from this, all the Official download links will be provided by Microsoft but if they are not working for you then try the below-given links.

Note:- All the above links are 100% working and I would recommend you not to download from unknown sources because they may contain viruses.

Also, if you have already downloaded the ISO File from the above link then I would suggest you to check out how to create Win 11 bootable USB.

However, we have already heard so many rumors related to Windows 11 features and new updates. But still, nothing is confirmed as many features may not be available at the time of the RTM release.

Apart from this, there are so many features that are removed from this latest operating system which were earlier present on Windows 10.

And done! If you want to know more then check out this detailed list of all new Windows 11 features.

Although, the requirements that are required for running Windows 11 on your PC or laptop are pretty basic to fulfill. But I have seen many users struggling with this and unable to install Win 11 on their system. Moreover, I have already shared a detailed post on minimum system requirements.

But still here is a quick overview for you.

Now if you have manually checked all the requirements and unable to fulfill the TPM part then check out this post on how to install windows 11 without TPM 2.0 version.

Similar to the previous version of Windows 10 this time also the Windows 11 RTM ISO build will be released in different languages and versions. Although, you can easily download the ISO file from the official Microsoft website but this will require an activation or product key.

And that’s why in the above section I have provided the direct download links for RTM ISO using which you can easily upgrade to Windows 11.

Although all the version is similar to the previous version of Windows but still I will mention them for informational purposes.

All the above mention versions will be available in 64 bit and 32 bit architecture support.

Similar to Windows 10, this new latest Windows Operating System will be released over the world. And here are the different RTM ISO supported languages with their country.

If you didn’t find your country then I would suggest you press Ctrl + F and then search for the desired location.

However, we have already published almost every detail about this latest stable build but I have seen many have reported that they are facing some issues with the Windows 11 RTM Final V10.0.22000.194 version.

Apart from this, Microsoft also says that they are aware of these compatibility issues of the operating system with the third-party applications. And soon will be fixed as soon as possible.

Currently, there are three software applications that are majorly facing these issues which are Virtualbox, Coc Coc browser and Intel Killer Software.

Apart from this, we have also concluded a list of builds in which users are facing issues while using it on their PC.

On 5 Oct 2021, Microsoft rolled out the stable RTM version of Windows 11 OS for all the eligible users who fulfill the minimum system requirements for the update.

What is RTM version of Windows?

Generally, RTM version refers to the Release to Manufacturing version. Before releasing to the general public it is sent to the manufacturers for finding the compatibility issues with hardware if any.

What RTM means in Windows 10?

RTM means Release To Manufacturing version which is released to PC manufacturers before the general public. And it means the same for all versions, whether it’s Windows 10, 11, 7, or 8.1.

Is there a Windows 11 computer?

Yes, there is a Windows 11 PC and it’s now available for all users. And you can easily upgrade the operating system if your computer is compatible with it.

So that’s how you can easily get the official RTM ISO file of Windows 11 for free without any product key. Also, we have tried to cover each and everything in this post and will be soon updating it at regular intervals.

Although, the ISO file will be available for both 32 bit and 64 bit but I will suggest you go for the 64-bit version if you want more performance.

Feel free to share your thoughts via comments & also tell us if you know any better about Windows 11 RTM ISO Download Links [ 64 bit and 32 bit ].